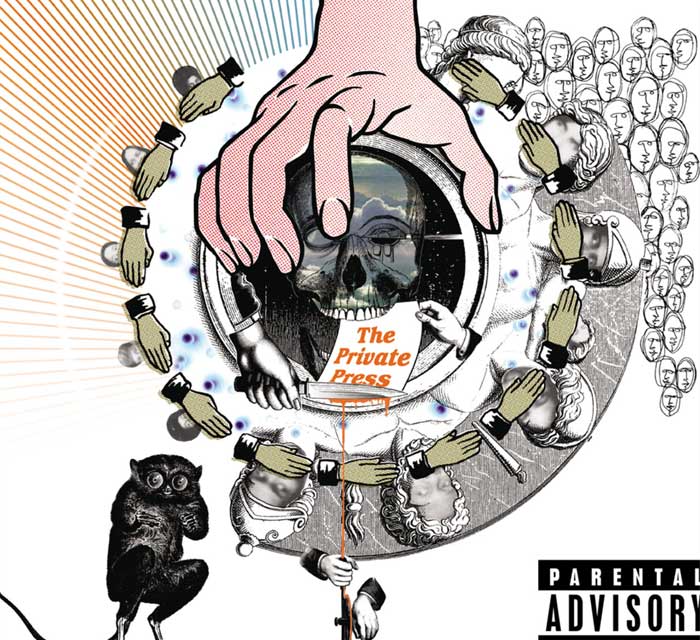 Six years since his debut ‘Endtroducing..’, here comes DJ Shadow with his second solo album proper.
‘The Private Press’ more than wears its heart on its sleeve – the title refers to those musicians who release their own music, regardless of commercial success, out of a belief in what they have created. DJ Shadow seems to be feeding off and paying homage to that spirit with this messy, idiosyncratic, wonderful album that appropriates generously then returns with interest a diverse collection of scratched and funky samples from Aladdin’s own bargain basement sale.
Thus we have ‘Fixed Income’, a slow rocker that draws you in with a single synth note playing out a rhythm – a deep blue bruise of a bass line hop-skotching  under the drum beats – eventually to be joined by languid guitar solos emerging like snakes from a basket. Towards the end a harpsichord passes through before we’re led out by the fading synth-bass.
This album responds well to volume. The years since ‘96, spent working on projects such as U.N.K.L.E. and remixes for the likes of Blackalicious have certainly whet Shadow’s appetite for loud, moody, jerry-built tracks that kick ass. We can hear this best on ‘Walkie Talkie’, the sassiest number on the album with its heavy, mid tempo drum samples, rapping, scratching and some kind of synth-bass that sounds like a ship’s horn – this is definitely music to swagger to.
‘Giving up the Ghost’ threads cello through breakbeats and the next few tracks shamble along nicely, with dilated pupils and in no particular rush to be any place soon, until ‘Right Thing/GDMFSOB’ which sounds like Steve Lamacq rapping over Les Rythmes Digitales. This sidestepping through genre after genre continues…’Blood on the Motorway’ for example, begins with gentle piano  a la a Moby blues track, before throwing loose drum‘n’bass rhythms over the top. The song then somehow mutates into a New Order demo with soul vocals…er, honest…and ‘You Can’t Go Home Again’ is a glorious faux-80’s instrumental.
It’s eclectic but stays within a context we understand – that of DJ’s borrowing from forgotten classics to create ruff’n’ready hip-hop and dance. The album as a whole doesn’t break any new boundaries – but that’s not its aim. It tries to entertain, to move, and to thrill you with nuggets of vinyl treasures that have been dug up, dusted and integrated into some nice’n’spaced out tunes.
A carnival of found-sound from one of the pioneers and masters of dark, groovy breakbeat. Welcome back DJ Shadow.