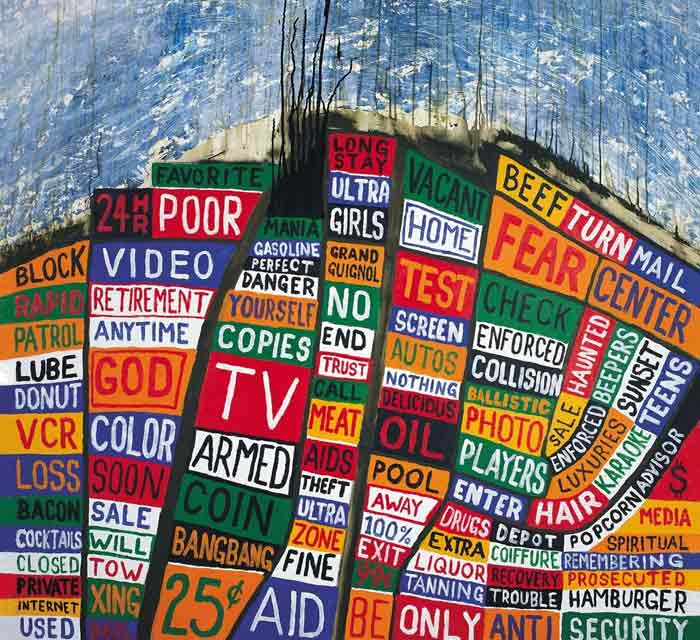 Some tough questions still remain unanswered in mid-2003, with regards to the mainstream’s ultimate millennial band. Are we to scorn them for a continued disdainful neglect of their own stomping ground, the mainstream? Pity them for their incomplete excavation of the leftfield? Treat them like remedial children for not sticking to the plot, berate them for failing to replicate works so singular and definitive that they could and should never be repeated anyway, for the sake of themselves? Do we question their motives for finally staying within floating distance of a grid reference long enough to assemble a record that can unequivocally be labelled a Radiohead record from the very first listen? Or do we just quit with the bickering and accept that they share their plain of existence with no peer and such individuality and ambition should at the very least be rewarded with some respect?
Of course, it could all just be as simple as a matter of taste. Maybe the tuneful angst of ‘My Iron Lung’, ‘Street Spirit’ and the like were better for their immediacy and definition. Maybe everything since has been an unnecessary diversion. But that would be selling them short, you know it would. It’d be like accepting the medium they work in to be completely dependent on commercial and external sources, and to be flawed because it thinks before it speaks. The shortest route from A-B isn’t always the prettiest anyway. And it’s hardly like they’ve fallen asleep at the wheel. Their eyes, though frequently suspicious, bloodshot or dilating, have always remained the picture of alertness.
Every Radiohead album so far has been an event unto itself, gravity afforded to each one in turn, rather than the band as a being. ‘The Bends’ blew the roof off ‘Pablo Honey’, ‘OK Computer’ shredded the ‘The Bends’ and clutched onto each shard with a modern brand of paranoia, and ‘Kid A’ / ‘Amnesiac’ (which should effectively be discussed in the same breath) were eaten up by that paranoia, becoming protective, nervous and insular, quite the inverse of their earlier existence (where any weakness was equally countered by a iron confidence). But this record is different. There’s no side-stepping, there’s no reaction or imminent next phase. What we seem to have here is acceptance. Acceptance and a wry smile.
We often hear about bands closing a chapter, turning a new page. But Radiohead have already done that with every last album, and continue to do so increasingly in the live arena too. This time it really feels like the conclusion of a book or volume. As ‘A Wolf At The Door’ spirals its way through a red-eyed stream of consciousness rant, with a beautifully picked melody, jazz drumming and celestial atmospherics wrapping a timeless bow around one of the finest 3 minutes they have ever committed to record, you can practically sense the hardback cover slamming firmly shut. What we’ve got in the most basic terms is a crossroads somewhere between ‘OK Computer’ and ‘Amnesiac’, but which looks back over every mile covered. This record is the first real time they’ve stopped moving and looked back, stood on the tallest peak and said ‘yep, all this is ours, all of it’, and been happy with what they saw.
There are moments that are difficult to deal with, naturally. The opening moments of ‘2+2=5’ – one of the most dazzlingly accessible tracks on here, like ‘Paranoid Android’ casting a gleaming eye over ‘Anyone Can Play Guitar’ – are peppered with shifty offbeats and defensive porcupine spikes. ‘Backdrifts’ wavers through unspecific dub vagueness. ‘Go To Sleep’ is an almost disappointingly straight-up acoustic upbeat strummer, but is stunningly rescued by a Johnny Greenwood sourced runaway bolt of vibrating static. But this record is effectively what happened to Kid A when he kicked the bars from his cage. He’s strong, and he’s certainly confident now, but he can never revert to what he was before because he’s inevitably a product of all that’s happened to him since.
It’s still a disparate and almost confused record, but one that looks like it’s found some answers. The malfunctioning, minimal Warp techno of ‘The Gloaming’ slides surprisingly well into ‘There There’ and then into the echoing, lonely Jeff Buckley-esque hymn ‘I Will’. There is strength and clarity in all the songwriting, from the traditionalist piano-led ballad ‘Sail To the Moon’, to the incredible ambient funk builder ‘Where I End And You Begin’ to the omnipresent writhing claustrophobia of ‘Myxamatosis’. There is nothing that could so much be described as incidental. It is a towering record, a record that hovers above your criticism, a record that is and will continue to be for many years to come. It’s neither a retreat to safety nor a bold step onwards, it’s a show of strength. And while that kind of stasis could also turn out to be a disappointment, it is actually like a greatest hits set, with completely new songs, and that’s no bad thing. In fact, it’s hard to imagine a better record coming out of them, now or ever. But we’ll see.