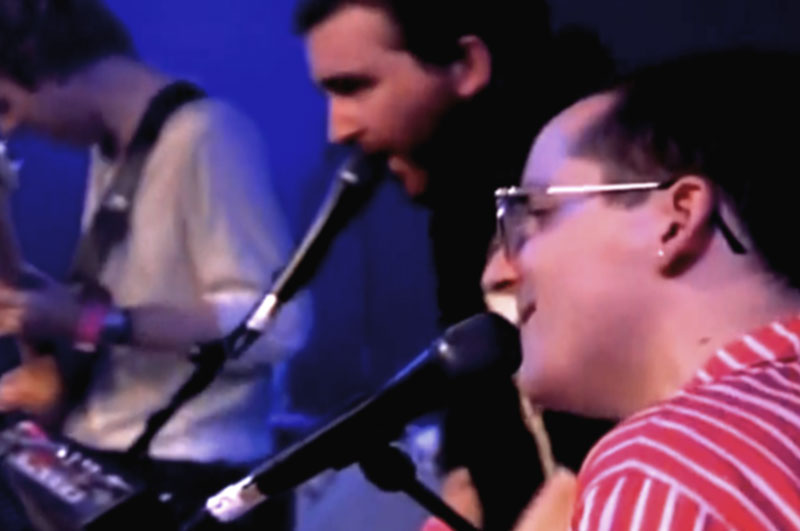 Edinburgh’s Cabaret Voltaire is not made for short people. The stage and surrounding area are one the same level, and when there is a sellout (as there was Wednesday night), short people, like myself, often have a hard time even seeing over the crowd. As Hot Chip took to the stage, I was banished to the far recesses of the room, with my head bent at a 90-degree angle, just to even glimpse the boys on stage. Were they worth it? Yes and no.

As the slightly nerdy, I.T office type band members took to the stage, I was slightly disappointed by the band’s initial lack of energy, or even interest in what they were doing. Their expressions seemed to suggest that they had just stumbled onto the stage, coincidentally holding instruments and were performing for want of nothing better to do. However, equally dwarflike frontman, Alexis Taylor began to shake his maracas, the crowd surged towards the stage, and politely nodding heads turned into full on hands-to-the-ceiling dancing as the band switched into overdrive.

As the bassline and synth combined to make an altogether harder sound, it became clear with ‘Boy From School’ that Hot Chip’s random amalgamation of sounds and styles were slowly beginning to win over both the dance and alternative music music headz of Edinburgh. Cabaret Voltaire had turned into a seething mass of bodies, so much so that some people had practically danced themselves onto the stage. The crowd even reacted fantastically to the spanking new Streets-esque, ‘Twist Myself’.

Warm and understated love songs such as ‘Colours’ might suggest the band might have had a vocal and lyrical bent more suited to your average Bob Dylan folk tune but there’s enough emphasis on beats and breaks to imply a strong commercial methodology.

Chart-seeking missile aside though, by the end of the night it was clear that Hot Chip’s nerdy-chic was getting slightly worn and embarrassing – rather like those pair of jeans you just can’t bear to give up on, despite the fact that they have worn knees and no longer fit. They had exhausted us, they had exhausted themselves. Their previously appealing nerdyness had become irritable and awkward. Think 80’s office disco, with the I.T office unleashing their inner diva.

Like the monkey’s miniature cymbals in the band’s signature tune, ‘Over and Over’ the jarring conflation of techno beatz and melancholy downtempo was repeated to tedium. It was too much for us, and I dare say it will ultimately prove a little too much for the layman. They may have provided a ‘memorable’ live experience but Hot Chip lacked the charisma and the drive to pull it off for the full duration.

However, they were a sell out act, and that certainly says a lot.

Previous: The Flaming Lips – At War With The Mystics
Next: Breaks – Big Deal Interview

Crud Magazine ran throughout the noughties and gave indie music lovers a wily old take on modern alternative music. It was the melting inside the pot, the spirit inside the machine. And maybe a bit like those bits of loose coloured objects you get at the bottom of a toy kaelidoscope. This is the shuffle and repeat button.